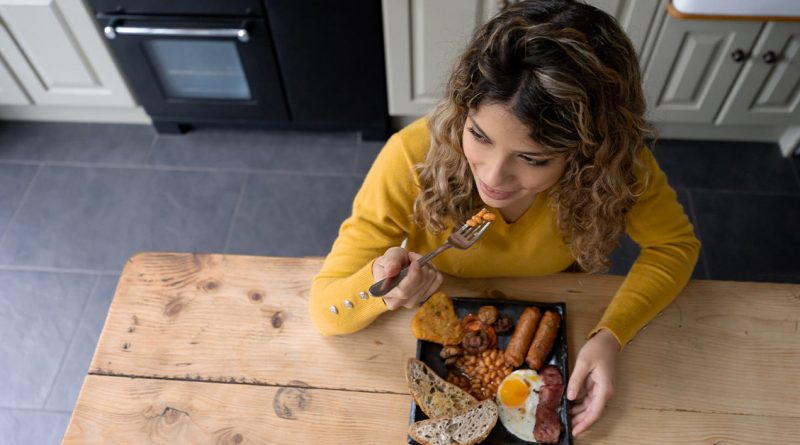 Breakfast has long been deemed the most important meal of the day.

What we eat and drink after waking up has been shown to have a big impact on our cognitive performance, mood, and energy levels throughout the day.

Now, new research from the Endocrine Society shows breakfast plays an even bigger role in our overall health than previously thought.

People who eat a big breakfast burn twice as many calories compared with those who eat a larger dinner, according to the new study published in The Journal of Clinical Endocrinology & Metabolism on Wednesday.

They also experience fewer cravings, particularly for sweets, and have healthier blood sugar (glucose) and insulin levels throughout the day.

Over the course of 3 days, researchers evaluated 16 men who alternated eating a low-calorie breakfast and a high-calorie dinner and vice versa.

Then, the diet-induced thermogenesis (DIT) — a measure of how well the body is metabolizing food — was tracked in the participants, as was overall hunger, blood glucose levels, and cravings for sweets.

The researchers discovered that, on average, the participants’ DIT was 2.5 times higher after breakfast versus after dinner, essentially showing that people’s metabolisms are more active after their morning meal.

Additionally, eating a high-calorie breakfast was linked to lower hunger pangs and sweet cravings throughout the day.

Compared with a richer breakfast, a low-calorie breakfast is more likely to cause snacking throughout the day. Plus, those who eat smaller breakfasts tend to eat larger meals at dinner, according to the researchers.

People’s insulin — a hormone that helps turn food into energy — and blood glucose, which is used for energy, were also lower after breakfast compared with after dinner.

The findings may have huge implications for people looking to lose weight, along with those with diabetes who have higher than normal blood glucose levels.

“Our results confirm that a large dinner has particularly negative effects on glucose tolerance, which should be considered by diabetic patients looking to avoid blood glucose peaks,” the researchers stated in the study.

“An extensive breakfast should therefore be preferred over large dinner meals to reduce the risk of metabolic diseases,” they added.

According to the researchers, skimping out on breakfast is a common dieting practice tried by many hoping to lose weight.

But has shown that people who eat less for breakfast often snack more and overeat later in the day, derailing their weight loss goals.

“This goes against our normal circadian rhythms, and for some with a strong morning hunger signal, it can lead to overindulgence once the fast is ‘broken’ at the midday meal,” Sood told Healthline.

“It can also lead to overeating at dinnertime in part due to the psychology of ‘making up for lost calories,’ and this often backfires,” she added.

Our metabolism is greatly influenced by the circadian rhythm, or sleep-wake cycle.

On top of that, people are more physically active during the morning and day, and physical activity helps manage insulin and blood glucose levels.

Eat breakfast to fuel your day

As the study shows, our metabolic rate slows down at night, making it more work for the body to digest food and burn it off for fuel.

Additionally, aim for a well-balanced breakfast — such as fruit, eggs, oatmeal, and yogurt — and avoid overly processed foods, like pastries and sugary cereals. Those get absorbed more quickly and can cause blood sugar levels to spike, Morton adds.

“One saying I believe in is that you should eat like a queen for breakfast, princess for lunch, and pauper for dinner,” Morton said.

New research has found that people who eat a big breakfast burn twice as many calories compared with those who eat a larger dinner.

They also have less hunger pangs and cravings, especially for sweets, throughout the day.

A big breakfast (compared to a bigger dinner) was also linked to lower insulin and blood glucose levels, implying that people with diabetes should prioritize breakfast over dinner.