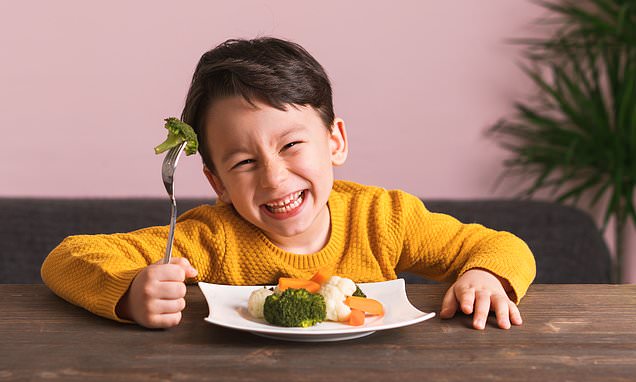 How eating vegetables is good for children’s brain: Scientists say iron found in leafy greens like broccoli gets stored in crucial cells

Researchers at the University of Pennsylvania measured iron levels in the brains of 1,500 children and young adults aged eight to 24.

They found that those who were deficient in iron didn’t perform as well in tasks involving reasoning and spatial processing.

Brain cells need iron to function and previous studies have shown that iron is important for mental as well as physical functions.

Foods high in iron include dark green leafy vegetables such as spinach, broccoli and watercress, as well as lentils, beans, nuts and seeds. 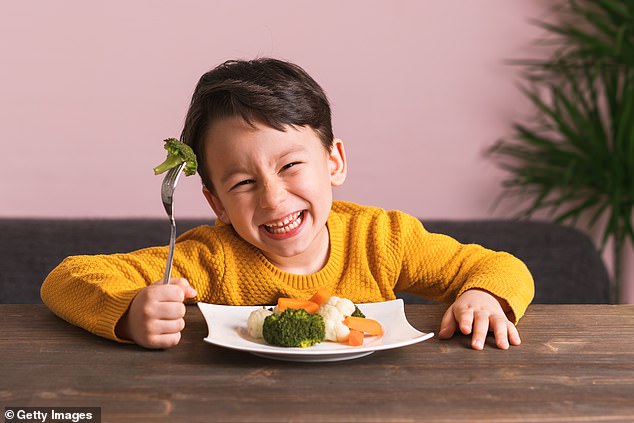 Children who eat their vegetables could see a boost in their brainpower, a study has suggested (file photo)

Dr Bart Larsen, who authored the study, said the results suggest children should be having iron supplements until they reach their mid-20s, The Sun reports.

Iron deficiency (ID) is the most common nutritional deficiency, affecting more than two billion people worldwide, according to the National Institutes of Health in the US.

Symptoms of a lack of iron in the diet include extreme fatigue, weakness, pale skin, chest pain and headaches.

This is because iron is needed by the body to produce red blood cells, which carry oxygen around the body.

Officials, including the UK’s Department of Health, state most people should be able to get all of their iron intake from their diet.

Children need around eight milligrams each day, while teenage boys need 11mg to supply their bodies as they go through puberty.

Teenage girls need more, at around 15mg, because of the iron they lose when on their periods.

Dr Larsen and colleagues measured iron levels in a group of youngsters to assess how it may affect their cognitive performance.

Brain neurons stay healthy by storing iron in the basal ganglia, situated in the centre of the brain.

The authors conclude there is ‘evidence that diminished iron content is associated with poorer cognitive performance even in healthy youth’.

The findings, published in the Journal of Neuroscience, support previous research investigating the benefits of iron supplementation.

A 2004 study by University of Pennsylvania showed that children who took iron supplements significantly improved their attention, short-term memory and long-term memory.

This was despite the fact that those who took part were not considered to be anaemic when the study began.

Dr Larsen said: ‘Importantly, as iron supplementation has been found to improve cognitive performance in iron-deficient adolescents, it is possible efforts to enhance brain iron concentration through dietary iron supplementation may have beneficial effects on cognitive development during this critical period.

‘Studies that prospectively evaluate the longitudinal impact of iron supplementation on cognition and brain development are necessary.’

Previous studies have also shown that reduced iron levels may be to blame for women feeling physically and mentally below par while on their period.

Scientists at the Nicolaus Copernicus University found that a lack of iron can disrupt women’s mood and cause them greater irritability during their time of the month.

Lower levels of the nutrient can cause women to become moody and less motivated, the researchers claimed.

The Polish team added that an iron deficiency may even be a ‘risk factor for mood disorders’ – such as depression.

According to the National Heart, Lung, and Blood Institute, an estimated 20 per cent of women of childbearing age have iron deficiency anaemia.

WHAT ARE THE SYMPTOMS OF IRON DEFICIENCY ANEMIA?

Iron deficiency anemia is a common type of anemia — a condition in which blood lacks adequate healthy red blood cells.

Without enough iron, your body can’t produce enough of a substance in red blood cells that enables them to carry oxygen (hemoglobin). As a result, iron deficiency anemia may leave you tired and short of breath.

Initially, iron deficiency anemia can be so mild that it goes unnoticed. But as the body becomes more deficient in iron and anemia worsens, the signs and symptoms intensify.

Iron deficiency anemia signs and symptoms may include:

If you or your child develops signs and symptoms that suggest iron deficiency anemia, see your doctor.

Iron deficiency anemia isn’t something to self-diagnose or treat. So see your doctor for a diagnosis rather than taking iron supplements on your own.