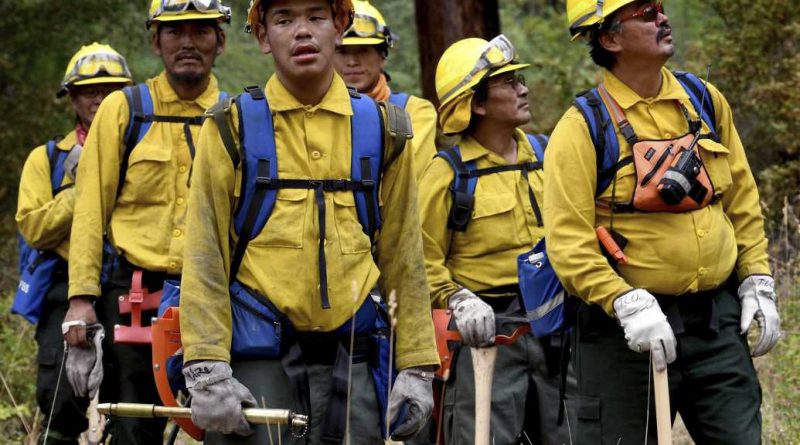 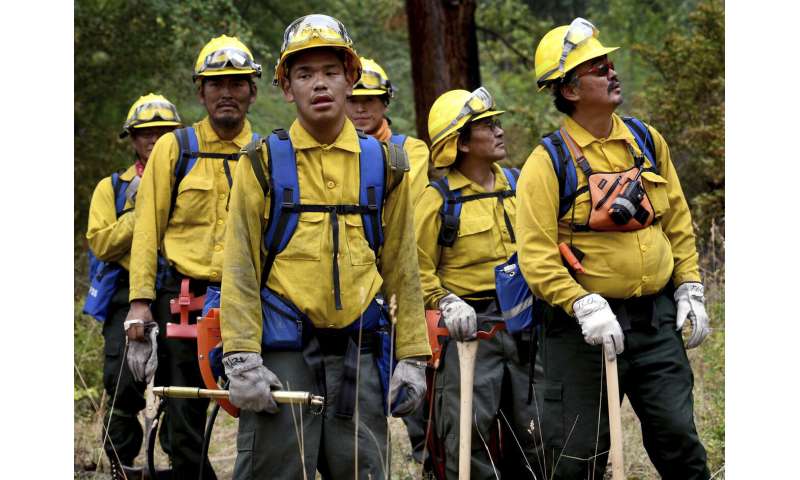 Outbreaks of the coronavirus could sweep through large camps where crews typically stay as they fight wildfires across the U.S., according to a federal document obtained by The Associated Press, and the problem is likely to get worse the longer the fire season lasts.

The U.S. Forest Service’s draft risk assessment suggests that even in a best-case scenario—with social distancing followed and plenty of tests and protective equipment available—nearly two dozen firefighters could be infected with COVID-19 at a camp with hundreds of people who come in to combat a fire that burns for months.

The worst-case scenario? More than 1,000 infections.

“The Forest Service is diligently working with partners to assess the risk that COVID-19 presents for the 2020 fire season,” the agency said in a statement Wednesday. “It is important to understand that the figures in this report are not predictions, but rather, model possible scenarios.”

The Forest Service said the document was outdated and being redone, and the newest version wasn’t yet ready to share. The AP obtained the draft from an official who has access to it and didn’t want to be named.

One of the authors of the risk assessment said Tuesday that in the new version, the infection rates remain the same. But while the draft originally said the death rate among infected firefighters could reach as high as 6%, that is being revised sharply downward, to less than 2%, to reflect newer data, said Jude Bayham, an assistant professor in the Department of Agricultural and Resource Economics at Colorado State University.

He said the initial death rate was based on data from early in the pandemic, when testing was far more limited. Based on new data, firefighters—who are largely healthy and young—will likely fare far better if they contract COVID-19 than the general population, he said.

For most people, the coronavirus causes mild or moderate symptoms, such as fever and cough that clear up in two to three weeks. For some, especially people who are older or have health problems, it can cause more severe illness, including pneumonia and death.

Federal guidelines released last week reimagine how to combat wildfires to reduce the risk of firefighters getting the virus. The guidelines urge fire managers to use small crews that can have the close contact that firefighting and travel often require, while staying away from other groups. The guidelines recommend avoiding the traditional large camps and relying on military-issue ready-to-eat or bagged meals instead of catered buffet-style meals at campsites.

Some fire managers also are told to take temperatures with their own touchless thermometers if possible. The guidelines say everyone should wear masks and other protective equipment when around those outside their immediate crew. Good cleaning and sanitation is recommended, as is isolating firefighters and potentially entire crews if COVID-19 is detected.

A review of incident reports from wildfires so far this year show the guidelines are difficult, and sometimes impossible, to follow and could actually increase some risks to firefighters.

“We have developed pinch-points that cause operational lapses in guidance that may very well get confused with policy and doctrine. This situation could result in injury—or even unwanted death—of our multiagency employees,” Greg Juvan, a fire management officer with the Idaho Panhandle National Forests, wrote in a report from a small wildfire last month.

Social distancing was difficult, and firefighters found it unrealistic to meet sanitation standards for truck radios, hand tools and other gear used in the initial attack on the Idaho wildfire, Juvan said. Social distancing guidelines call for more vehicles to transport crews, but that led to congestion on the narrow roads leading to the fire. The guidelines could raise one of the greatest risks to wildland firefighters—traffic wrecks, Juvan said.

Even something as basic as sanitizing vehicles proved problematic, with cleaning supplies difficult to find, the report said.

In New Mexico, several agencies responded to a small wildfire last month, with some not practicing social distancing and other virus policies appearing to vary greatly, George Allalunis, a Carson National Forest engine captain, wrote in a report.

For the Forest Service’s draft risk assessment, researchers created scenarios using three actual fires from 2017 and applied disease modeling. They found testing every firefighter before they started work reduced the coronavirus risk most significantly for short, high-intensity wildfires, said Bayham, the professor. But for longer, drawn-out firefights, initial testing was less important than keeping firefighters spread out in small campsites.

The models showed that even with strict pre-work testing and social distancing, about 21 COVID-19 infections could be expected in a large camp like that used for a 2017 fire in Montana. In the worst-case scenario, more than 1,000 firefighters would be infected. The problem could compound as fire crews are sent to new locations over the monthslong fire season, which has largely begun.

The risk assessment will be updated throughout the season, the Forest Service said.